The national lockdown has resulted in a significant increase in law enforcement presence across the country.  Around almost every corner, SAPS is on the lookout for anyone who breaks the lockdown laws, which are enforced under the Disaster Management Act. But for those who violate the law, mainly anyone who is arrested for a less serious crime, the SAPS may give the option to pay a fine. Many citizens don’t know that paying lockdown admission of guilt fines in South Africa isn’t necessarily a quick-fix solution to the legal problem and can have long-lasting consquences. Here’s what you need to know:

What is an admission of guilt fine?

As the name suggests, it’s an amount of money paid as a penalty for breaking a less serious crime. Usually, it’s made an option by the legal system to prevent overloading of the courts and allow the person in question to resolve a matter quickly.

How much is the lockdown admission of guilt fines for level 4 transgressions?

On May 1 2020, The South African Judiciary published a list of directives indicating what citizens would pay as fines, should they break any of the lockdown restrictions. Not all areas have published directives, but details are available for Gauteng, Kwazulu- Natal and North West. While the different provinces’ regions and magistrates have slightly different interpretations, this is a general overview of the charge and the associated fine: 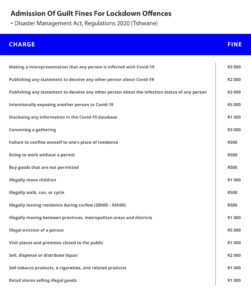 Think before paying an admission of guilt fine. We’ve got your back!

While paying a lockdown admission of guilt fine in South Africa might seem like a quick-fix solution to avoid jail time, many people don’t know that it can result in getting a criminal record. That’s why it is imperative to speak to a lawyer before signing any document admitting to being guilty. What’s more, in the event of being arrested, LAW FOR ALL policyholders are encouraged to contact the 24hr Emergency Bail Line for immediate assistance.

The Retrenchment Process and Your Legal Rights

How to Manage Your Money in the Time of COVID-19

How the Courts and Justice System will Work During Lockdown

Compensation For Workers That Contract COVID-19 While On Duty

LAW FOR ALL: Legal Cover and Peace of Mind during COVID-19

Coming Together to Combat COVID-19: New Regulations to Follow

The Coronavirus and Employee Rights: Tips for Handling the Situation in the Workplace